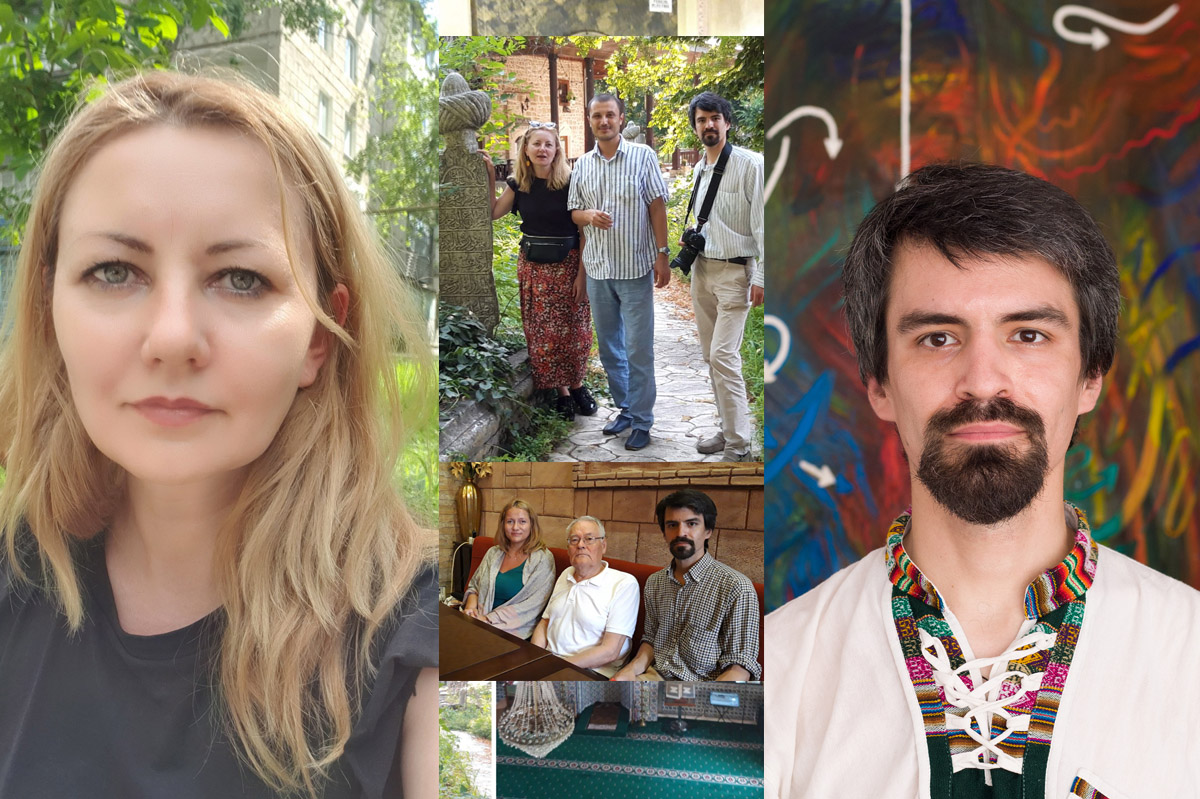 The artists interacted with intercultural mediators and migrants who talked about their life in Romania and the Arab community from Constanta, especially about the Syrian community established here. During the working visit at the JRS Romania and the Integration Center for Refugee from Constanta the artists participated within a Romanian language course finding out more about the activities carried out within the Centre. They discussed also with the Civic Resource Centre about the integration process of the refugees and the migrants and their positive contribution to the local community. Within the UDT – Tatar Democratic Union from Constanta meetings they enjoyed cultural tours of the mosques from the Mangalia, Constanta and Babadag while debating about the culture and the traditions of the Muslims and Tatars from the Dobrogea region.

Victoria Ghilas is an artist from Sibiu county, Romania with migration background as she also arrived in Romania as an immigrant from the Republic of Moldova and knows very well the feelings of being in a new, foreign place, away from home and learning by yourself how to adapt and integrate into the host society.  She graduated University of Theology Andrei Saguna, Department of Heritage, Conservation and Restoration of Art Objects and she is currently a painter, painter-decorator and jewelry designer. The artist uses different work techniques, applied by drawing, color, ornamentation, traditional techniques but also new, innovative techniques. Her creations have been and are presented in several national and international fairs and exhibitions. The artist confesses that “nothing can equal the joy of settling in a totally new place and of establishing a deep connection with the host community, on a cultural, human, and artistic background. The feeling of communion, of deep connection and the meeting between people, at the highest levels, where the differences disappear, is achieved through the universal language of art.”

Constantin Rusu is an experienced young artist from Bucharest, who graduated with a bachelor’s and master’s degree from the National University of Art in Bucharest, Painting department, and is currently pursuing doctoral studies at the same university. In 2015, the artist won the Constantin Brâncuși Scholarship, offered by the Romanian Cultural Institute, where he benefited from an artistic residency in Paris, France. The artist uses different means of expression, including drawing, engraving techniques, painting, and assembly, mixed media techniques that involve personal features and graffiti-specific techniques. Occasionally, he used modeling in clay, plaster and burnt pottery. The artist organized several personal exhibitions in Romania, the last one taking place in February 2020, within the AnnArt gallery in Bucharest, where he combined drawing and painting with music, under the title “Ekphrasis. La Folia”. Also, the artist exhibited in numerous group exhibitions in Romania and abroad, an important moment, being represented by the participation in the a-part art festival, in Alpilles, Provence, France, in 2013. The artist’s works are present in various catalogs of exhibitions and publications, such as Arta magazine, catalogs of some editions of the Arts in Bucharest exhibition, the catalog of the International Painting Biennial in Chisinau, 2017 edition, and personal catalog with a selection of works.

Artistic concept/objective(s) of the residency

Timeline of the residency (in particular specify if public events are foreseen with the dates and details), Involvement of the local community

The role of the artistic creations of Victoria Ghilas and Constantin Rusu is to help raising awareness, knowledge and understanding between natives and immigrants and to create a renewed sense of trust and belonging to a certain place, having a positive impact, both on the involvement of the locals into society, and also on their perception regarding the immigrants.

Public spaces and cultural centers are essential ingredients in every community and it provides opportunities for people to meet and be exposed to a variety of experiences, and the perfect places to present the artistic creations to the community.

The artistic creations made by the two artists, will be exhibited within a public event held in Constanta on 10th of September 2021 that will gather authorities, academics, non-governmental organizations, immigrants and intercultural mediators, citizens and mass-media representatives.

The mission of the two artists was that to work on the migration and intercultural dialogue theme, to explore the daily reality of the local community of the Constanta city, to research and analyze critical situations, experiences, stories and the perceptions of the migrants and locals, the cohabitation of migrants with the residents, trying to bring forward the positive contribution of the migrants into the host community, respectively in the Municipality of Constanta and Dobrogea region.

The artistic creations made by the two artists during the artistic residency include a series of paintings, pictures, sketches and small texts that highlight and express the vision regarding the feelings and the emotions of migrants, the impact and their influence within the local community, the interaction or the reciprocity, the change and the evolution.

The artistic productions became intrinsically valuable because it helps to understand other people’s experiences, developing a sense of solidarity and humanity, it helps to see differently. Art has the power to change lives. Then there are the long-term impacts, like shared memories, increased empathy and a broader worldview. 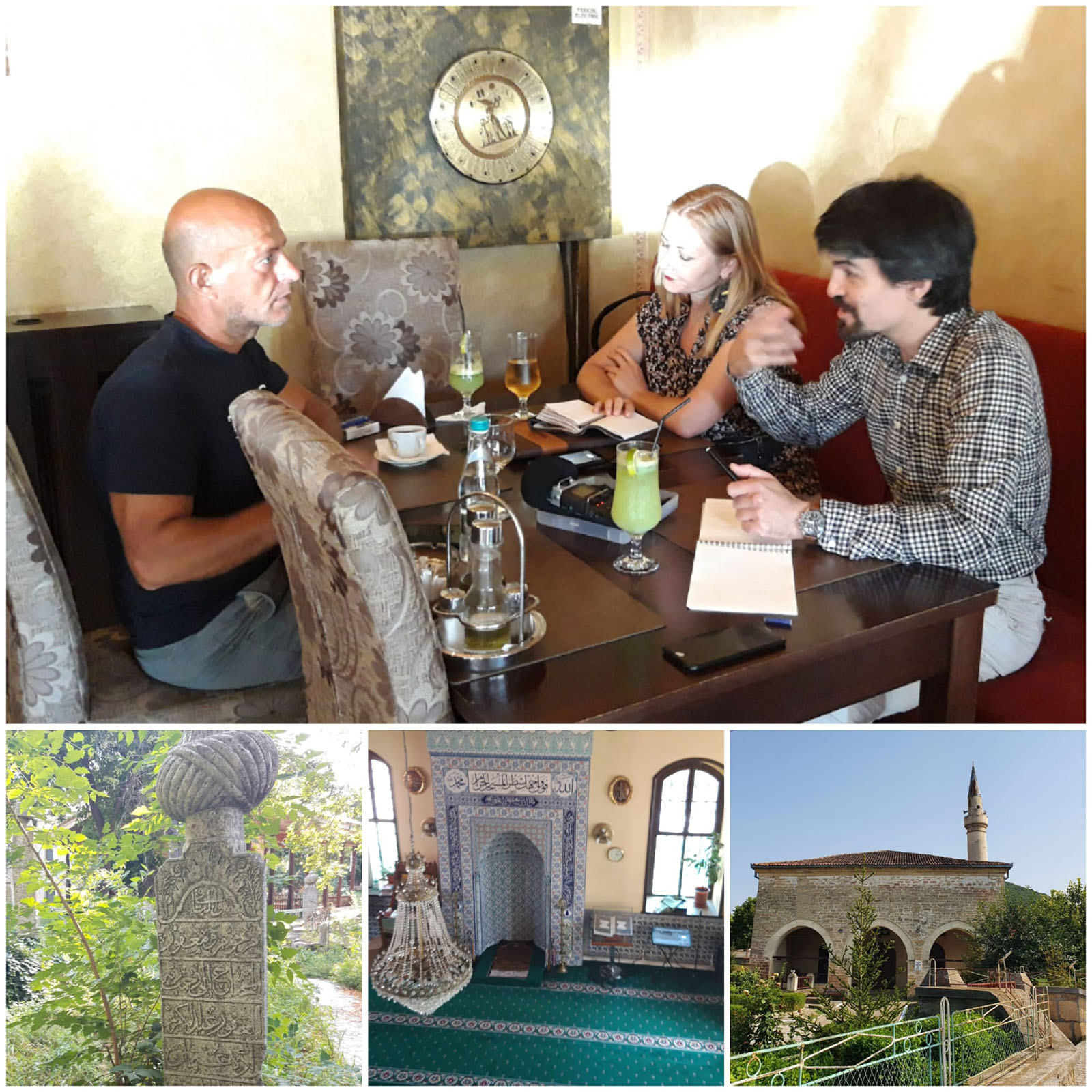