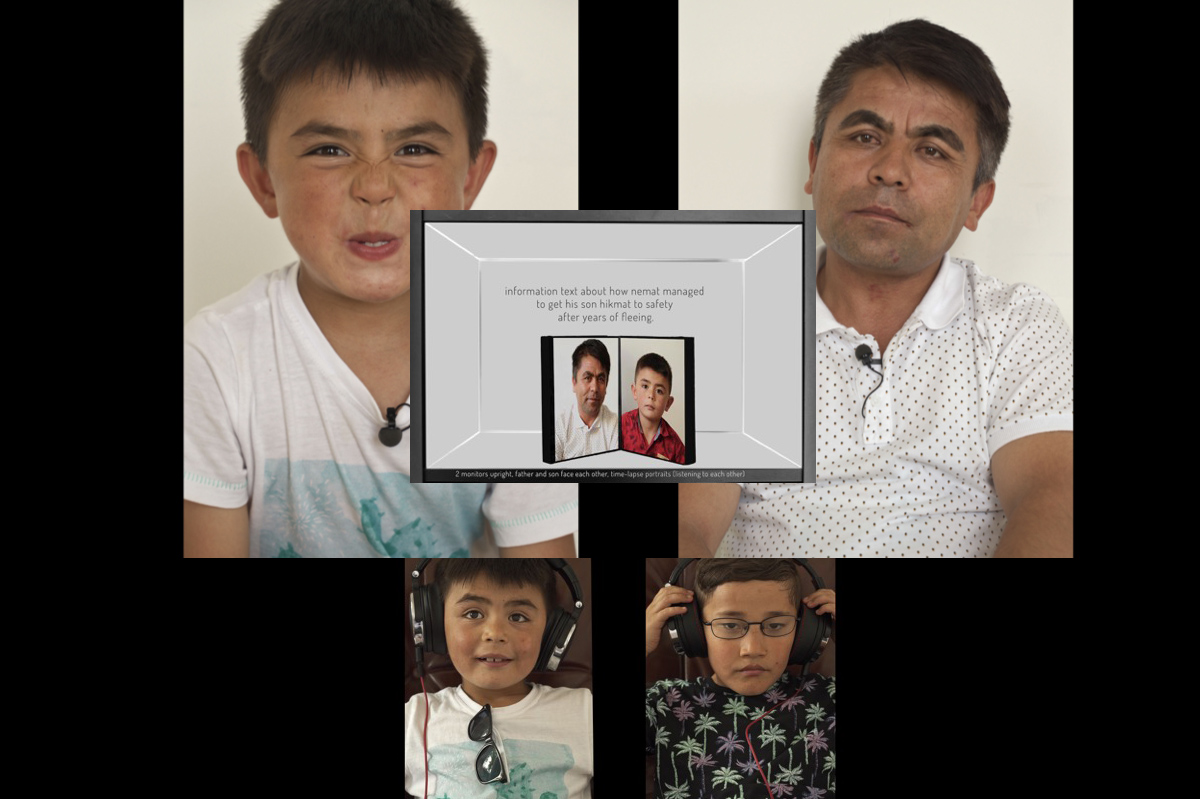 After years of fleeing, Nemat managed to bring his family to Austria. His son Hikmat saw his father for the last time as a toddler. At the age of 8, Hikmat meets a father who is basically a stranger to him. Victor Jaschke, filmmaker, German-teacher and friend of Nemat will develop a portrait of this relation together with father and son.

The installation consists in the following:

Small black box on the wall, white inside
2 book-sized monitors stand upright at 90 degrees angle to each other.
On the left monitor the father, on the right the son in time-lapse portraits (listening to each other).
A text on the inside back of the box tells how Nemat managed to get his son to safety after years of fleeing.

Born 1982 and 2013 in Jahgori, Ghazni, Afghanistan.
2005 to 2007: work in a quarry in Iran.
2007: first escape from Afghanistan to Austria. Deportation to Greece under the Dublin Agreement. 5 years without financial support and the prospect of asylum, mostly homeless.
2012: deportation to Afghanistan.
2012: marriage to Anis Mohammadi in Afghanistan.
In 2014, he fled to Europe again because of acute threat.
After years of threat and fights, in 2021 he can finally bring his wife Anis and his son Hikmat to Austria. Hikmat was 17 months old when he last saw his father.

1985-89: studies landscape ecology and landscape design in Vienna.
1989-93: studies directing and camera at the film academy Vienna.
Since 1991, he creates short films, documentaries and art films working with artists and art groups in Austria and Germany on installations, public interventions, exhibitions and artistic research.
Since 2007, he works on documentaries in Indonesia and teaches media competence.
Since 2010, he creates video and photo-works for cultural institutions in Austria.
Since 2015, he has been working with refugees using rule-free language to counteract the abuse of the language as an instrument of oppression.
Since 2019, he runs a long-term photographic project with refugees in Vienna, part of the “dokumentarisches labor”.

The life of the refugees is a black box. The authorities are trying to anonymize asylum seekers in order to avoid fraternization with the local population and thus resistance in the event of deportation to their country of origin. Asylum seekers themselves gloss over their experiences so as not to worry their families.

“blackbox inverted” tries to reverse this mechanism in the interior of a nuclear family.

In addition to filmmaking, Victor Jaschke works with refugees at the Ute Bock Language Center. Nemat and Victor became friends in a language class. Victor has been looking for a way to make Nemat’s story visible for a long time. Now that Nemat has been granted asylum and has thought about how he can tell his son about his experiences, we want to try that together.

Time-lapse portraits are a technique used to visualize the thoughts and feelings of the listener. When used correctly, this technology gives the viewer dignity and acts as an intensifier of attention for the viewer.

These portraits are the result of video workshops. On three weekends in June, Nemat and Hikmat will playfully explore video as a communication tool in a studio that has been redesigned as a playground: self-observation, interviews, self-questioning, time-lapse recordings of listeners’ faces. Hikmat will also bring his friend Maishan, who is of the same age in order to create a relaxed and friendly context allowing him to ease into the workshops.

Videoworkshops will be held in June and July 2021, public presentation in September and October in Traiskirchen in several cultural spaces.

The municipality of Traiskirchen will show the installation in public places.

The video installation will also be made visible to asylum seekers and teachers at the Ute Bock Language Center in order to encourage people to talk out of their black box.