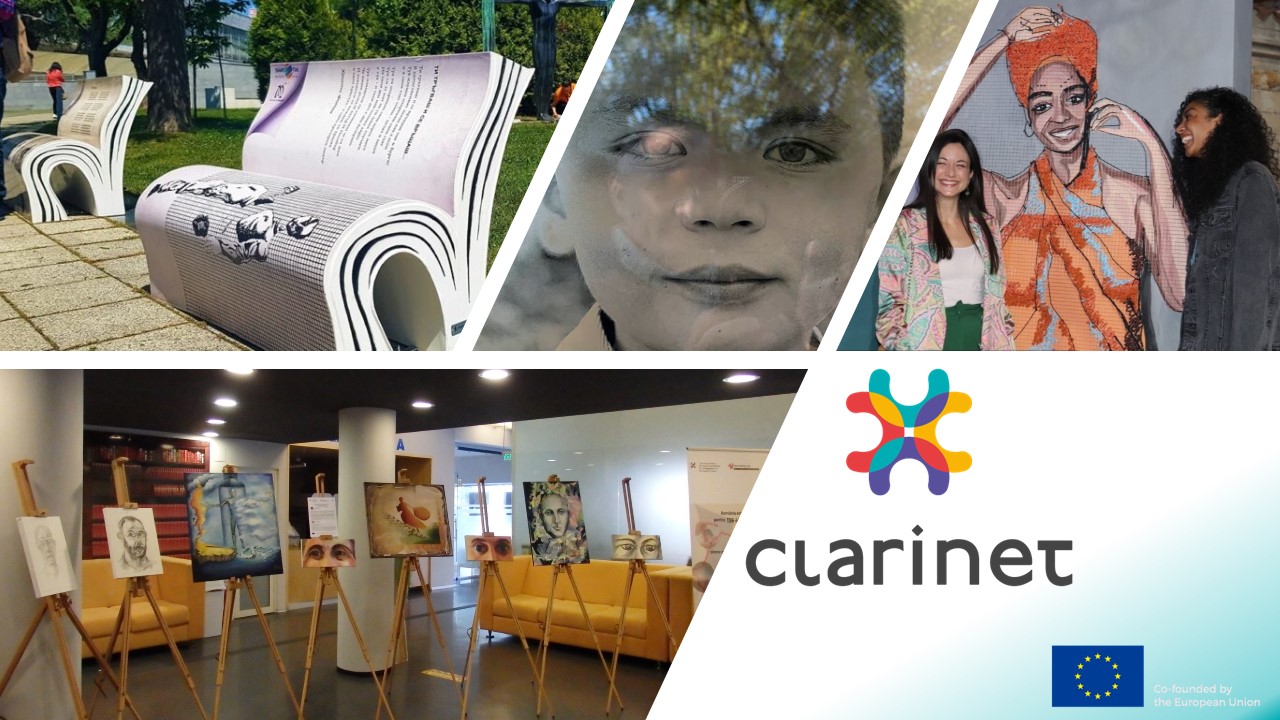 Three years and a half later, from island to island, from border to border, CLARINET partners have met in Procida – Italian Capital of Culture in 2022 – for a final event organized by BJCEM – Biennale des jeunes créateurs de l’Europe et de la Méditerranée.

CLARINET project team is well aware that migrations have always been part of the experience of the mankind, that only evolves through relations, contamination of ideas and cultures. And creativity too.

It has been creativity indeed what has marked the life of CLARINET project. The role of artists of all disciplines has been one of the pillars of our activities. Together with communication campaigns it allowed to raise the awareness of European citizens on the positive contributions that migrants bring to our local communities and the society as a whole.

Last June 18, in the townhall of Procida, we all realized how rich and impactful have been the actions – with a special reference to the Artistic Residencies and Campaigning – implemented at the borders of Europe.   The event was introduced by the Procida Municipality’s councillor for culture and BJCEM president Mercedes Giovinazzo. Following this, representatives of partner local authorities presented the activities held in their respective cities. 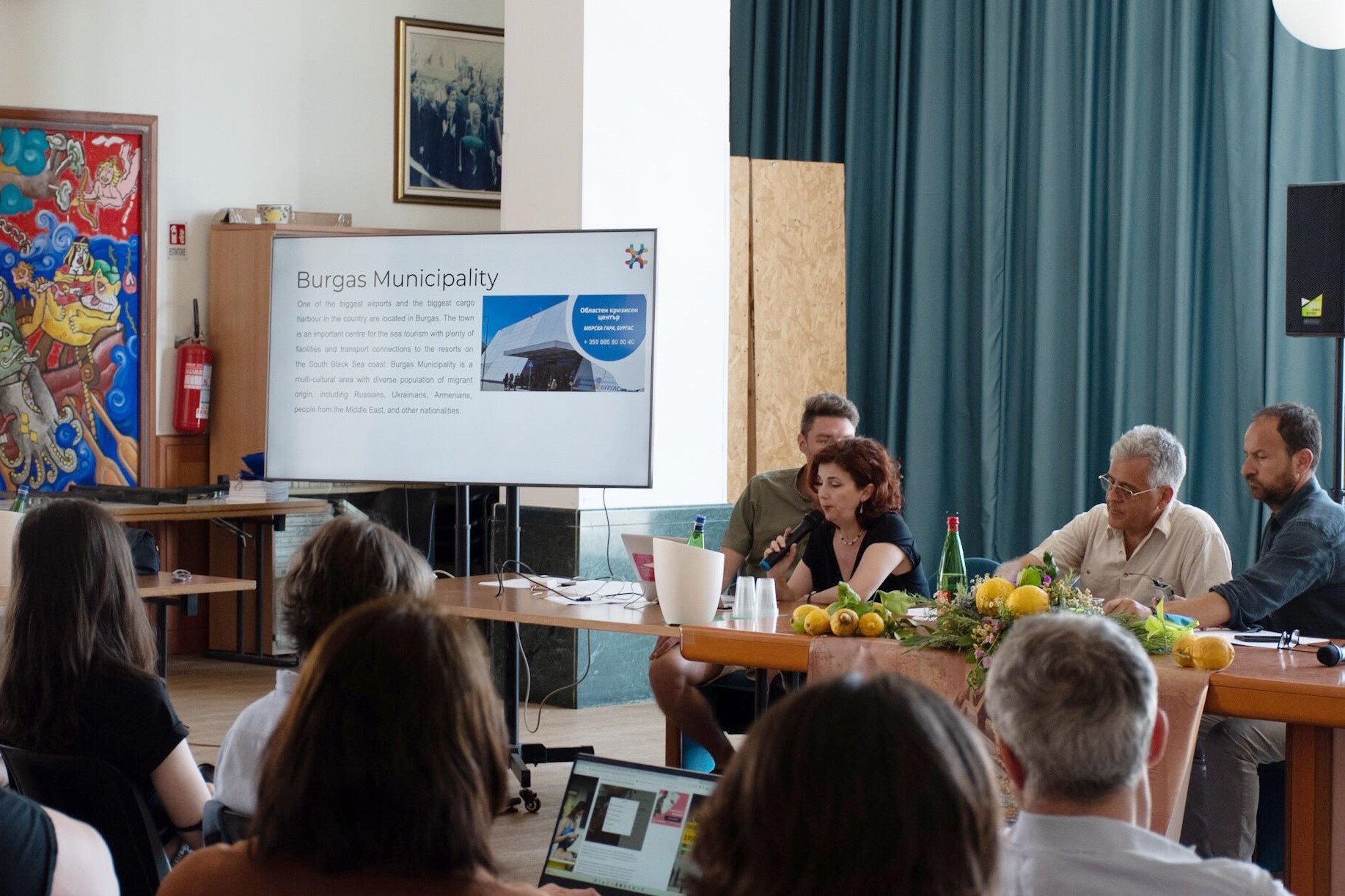 In Burgas (Bulgaria), a multicultural city, uniting the differences, carrying the spirit of foreign traditions and combining an image influenced by the style of foreign architects, writers and artists who have left a lasting mark and contribution to the lives of local residents, the Resident Artists have been a painter and a street artist and film director. Iva Yaranova produced three paintings depicting migrants in their daily work in the city. Director Ivan Nikolov shot a short film based on interviews with migrants. A whole day of events open to the entire community was organised afterwards: the audience was engaged in several open-air events, in the opening of an art installation and in dialogue with migrants telling their stories of social inclusion. 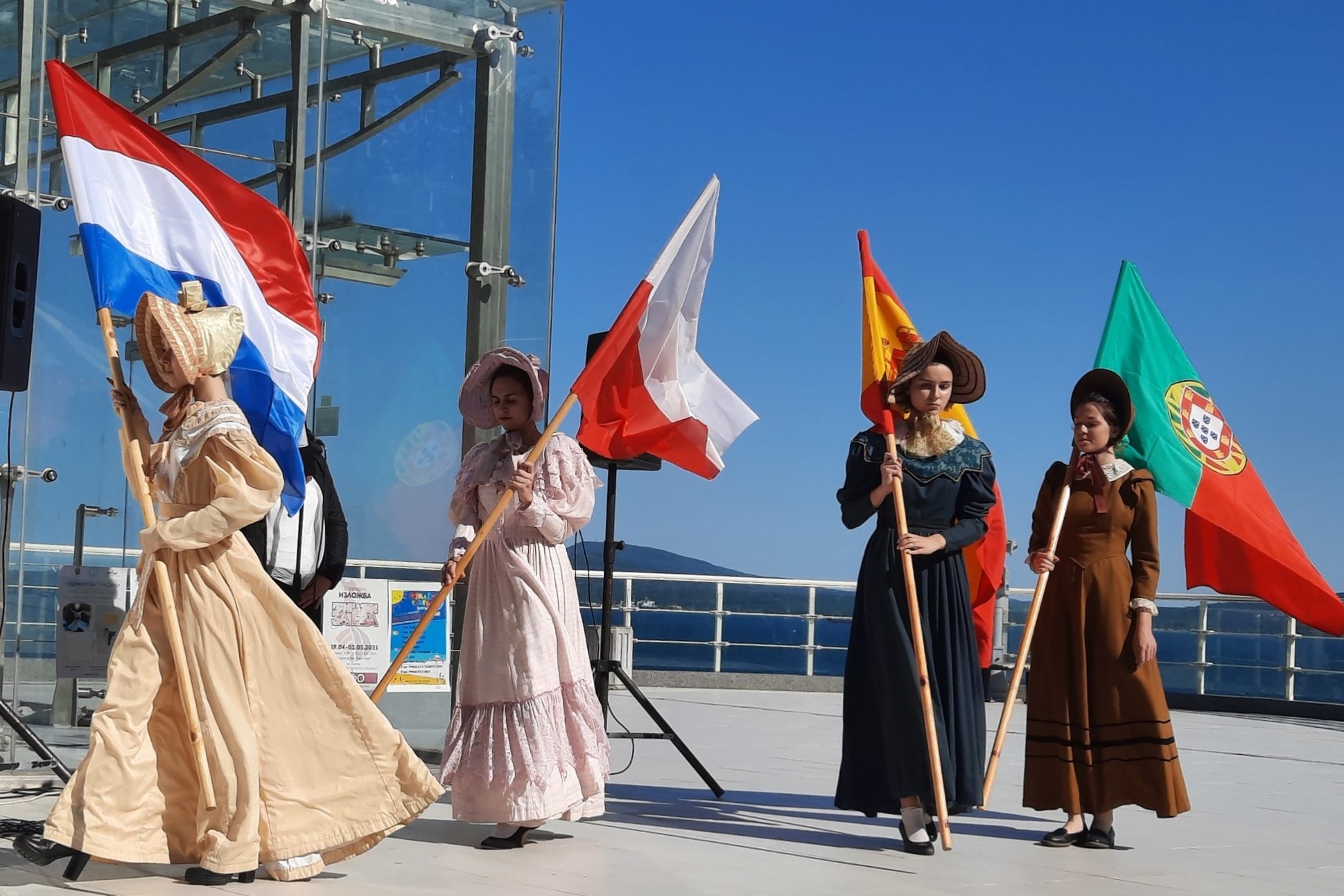 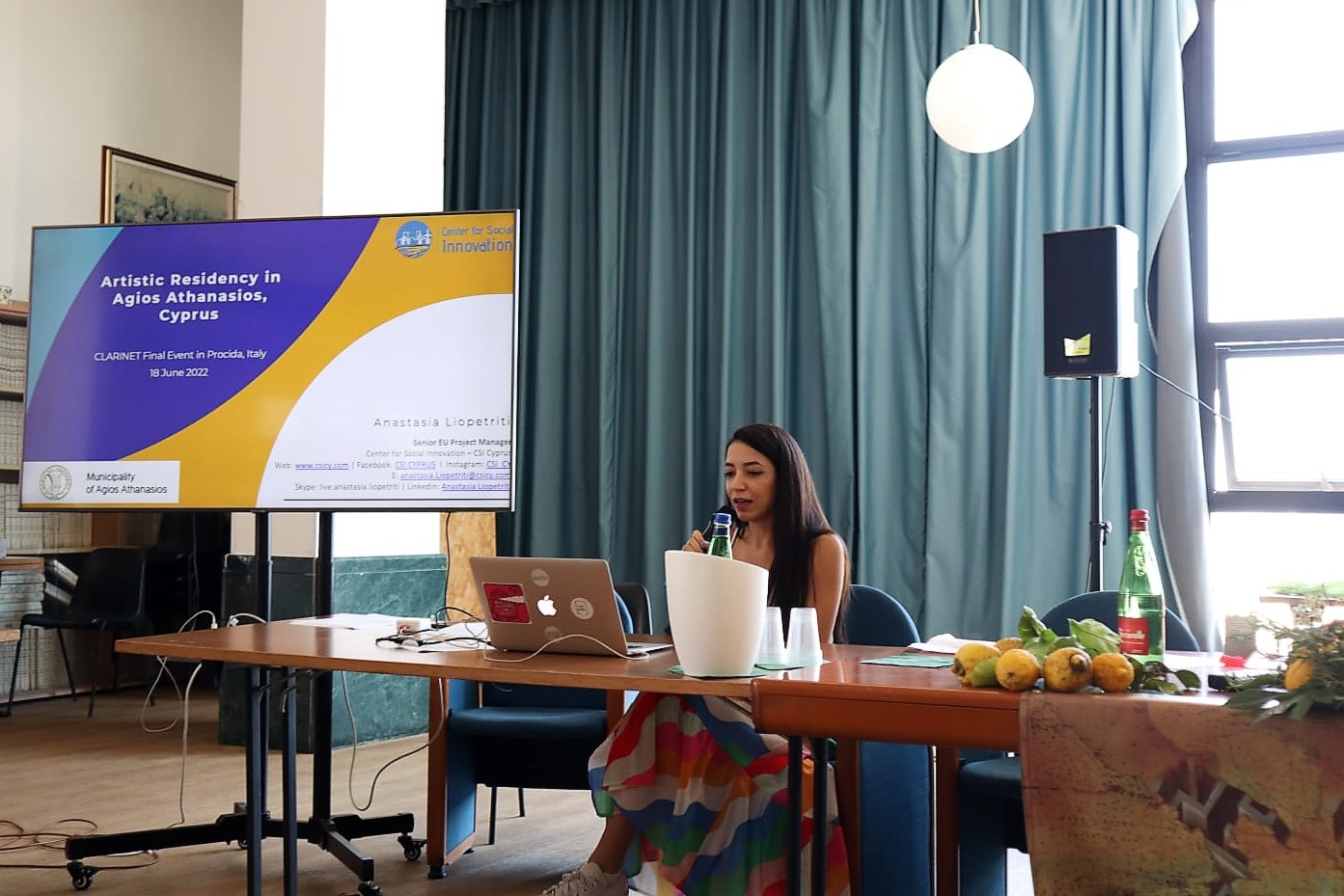 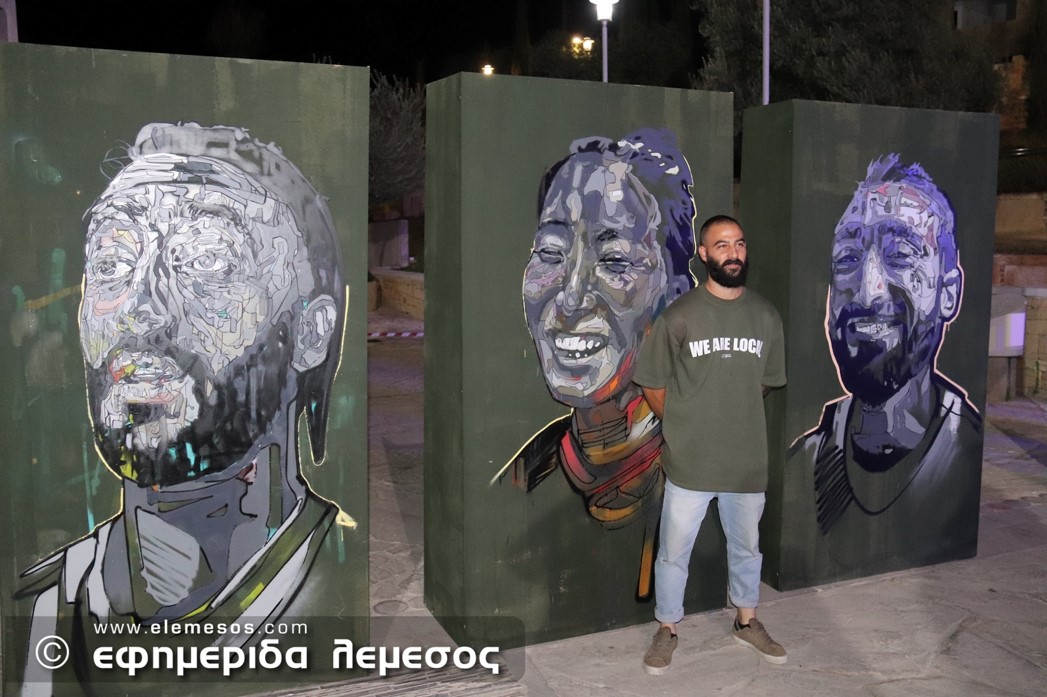 Agios Athanasios’ (Cyprus) Artistic Residencies aimed at promoting migrants as integral members of the local community in the form of artistic creation. The artists – visual artist Iphigenia Papageorgiou and muralist Christos Kyriakou – took photos and portraits of migrants living in the Agios Athanasios area and produced 6 paintings in wooden canvases with paint as the central material. Three paintings incorporated 3D elements using thread and metal mesh. This project tried to capture the lives of several migrants living in the area and transfer the elements into the artistic project. This established a sense of familiarity between the subjects of the project and the audience. The artists directly involved the local community of migrants by taking photo portraits and getting to know the people. The Communication Campaign disseminated the outputs of the artistic work described above by a public event, consisting in an art exhibition displaying the works of arts that the local artists had developed which culminated in a concert and a reception. 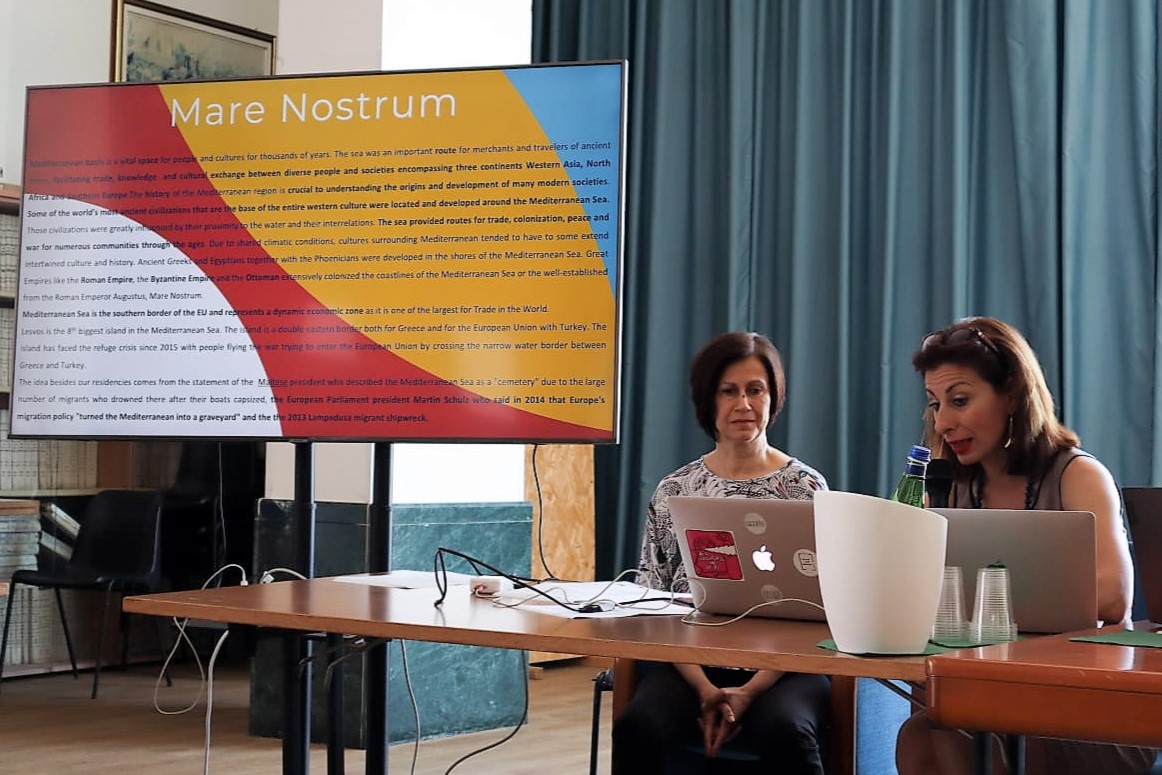 In Lesvos (Greece), the artist Dimitris Kalantzakis created a painting and a photo album. The painting, “THE MEDITERRANEAN”, showed a nude female figure lying/sleeping in the bottom of the Mediterranean Sea while the countries of Italy, Greece and Turkey were showcased as labyrinths. In the painting the female figure represents Mediterranean Sea and at the same time every refuge life that is lost in these waters. Labyrinths depict the complexity of the situation in every aspect (humanitarian, societal, economic, legal) that this situation is causing to islands, municipalities, regions, states and the EU. 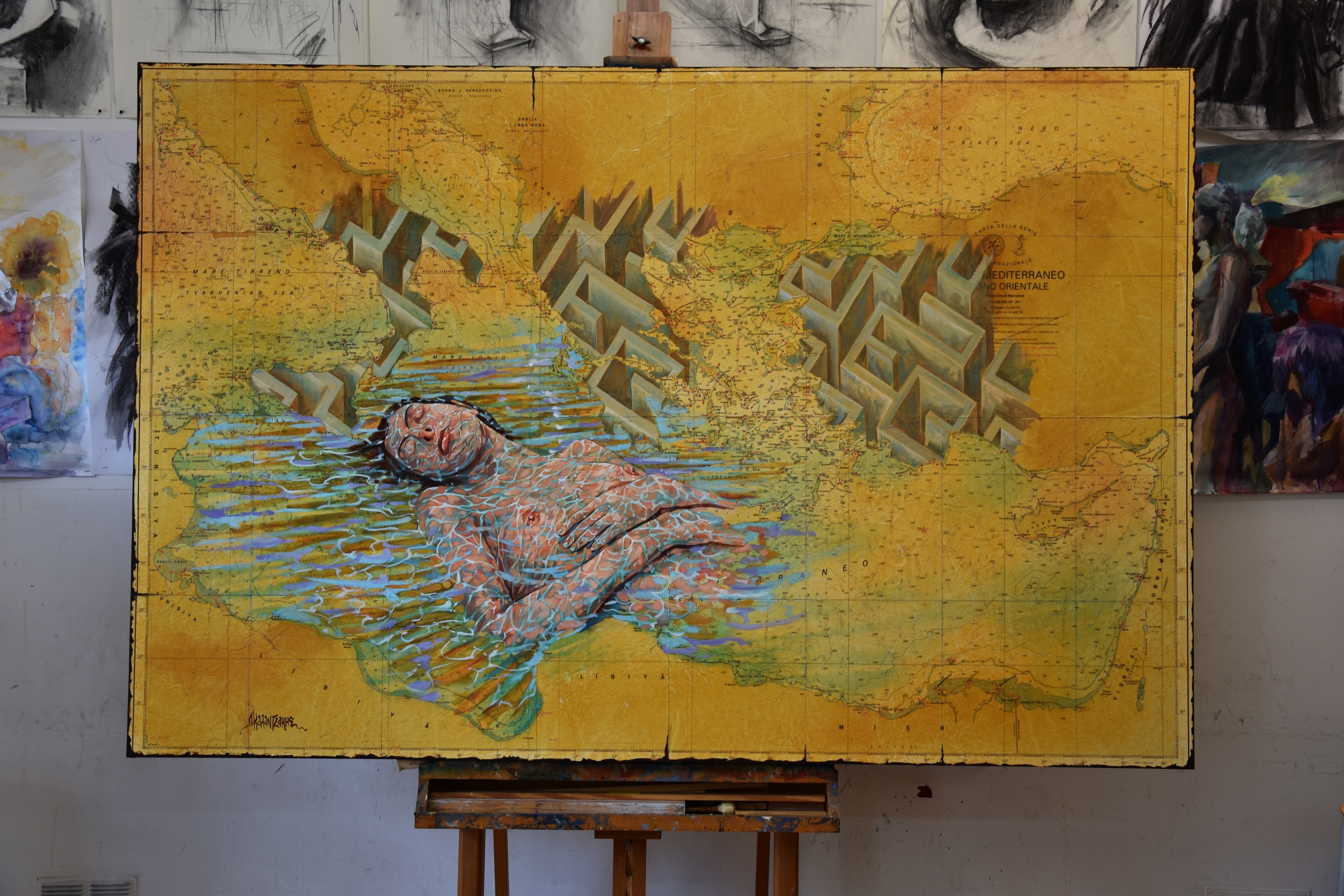 The second part of the residencies in Lesvos consists of an album. Here the artist Thomas Mamakos deeply affected by the refugee crisis as well every resident of the North Aegean islands tried to capture the drama and the trauma of the refugees. The artist who uses his camera to record and to watch the movement of refugees on the island of Lesvos since 2015 was also influenced by Fabiola, a Chilean woman who came and stayed on the island in order to help refugees to heal their wounds. 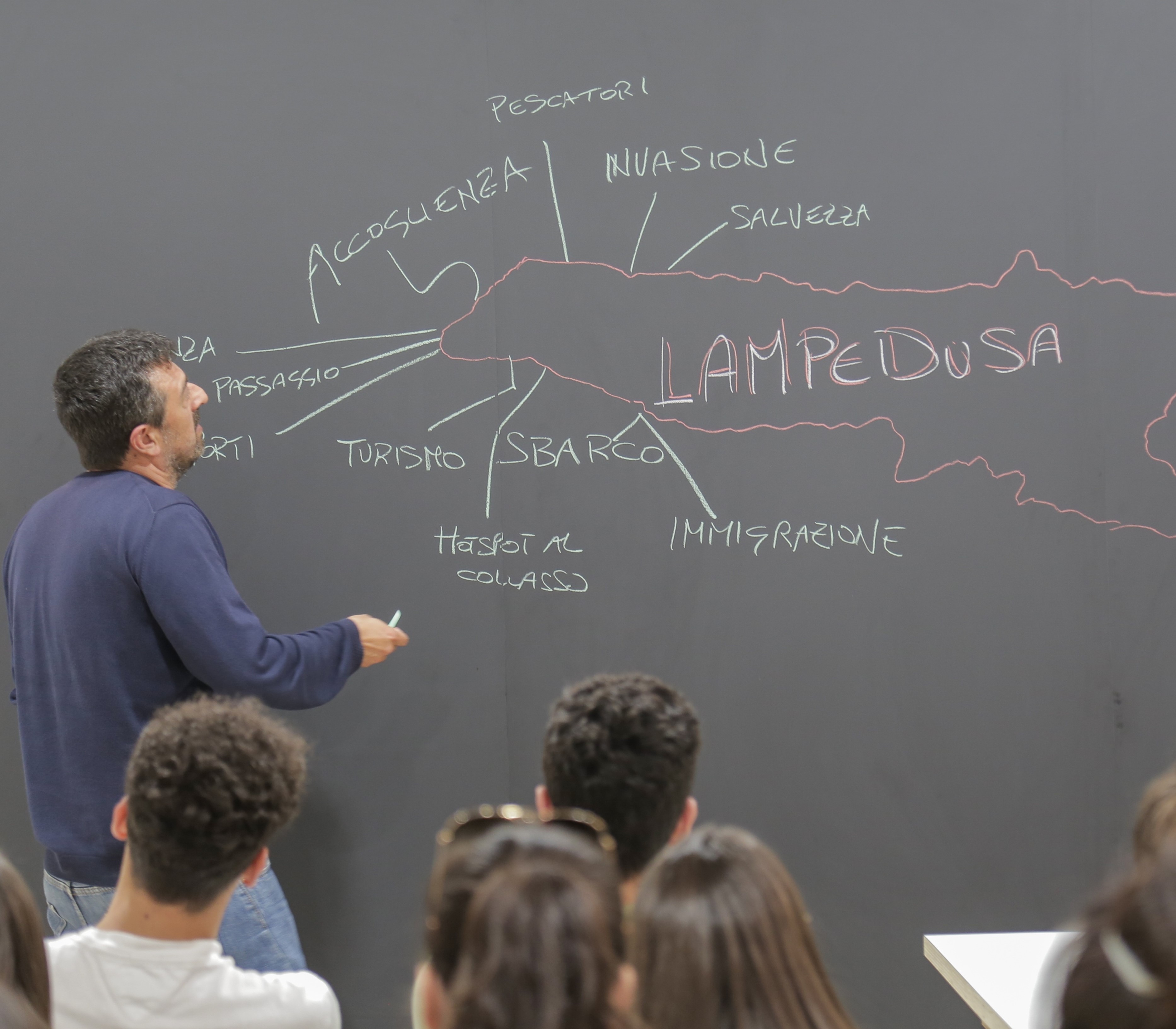 Many communities like Lampedusa have become subjects of storytelling while their voices are not expressed. As it is the case in Lampedusa (Italy), where an Artistic Residency was held by journalist Christian Elia and photographer and video-maker Angela Krasniqi. The purpose of the three-day residency was a self-narrative workshop with 21 high school students from the island’s school, Istituto Luigi Pirandello. The artists have been chosen for their ability to interact with the local community and especially with the school pupils who participated to the workshop which concluded the residency. Their complementary experiences and skills allowed them to support the pupils in learning the techniques of photography as a tool to communicate about themselves and about the place where they live.

The workshop has been structured with one day in the classroom and two on the field, starting with the idea that changes in official and social network media have changed the way we communicate. In the classroom workshop, a mind map was generated to reflect together on how narratives about Lampedusa are generated in the mainstream media and what the teenagers on the island would like to be told instead. After a technical training on the use of photography-the students’ chosen media, the group moved on to field work, with the artists-trainers accompanying the students in making the photographs that, to their eyes, best talk about Lampedusa. The true protagonists of the residency have been the pupils of the local high school: the video editing of the workshop, product of the art residency, is an emotional video that crosses the work of the artists with that of the students, editing images produced together. The final project will become a Multimedia Longform: Audio/Photo/Video/Text/Drawings made by the children, including also interviews with their parents, and which will be published on the magazine Q Code Mag. 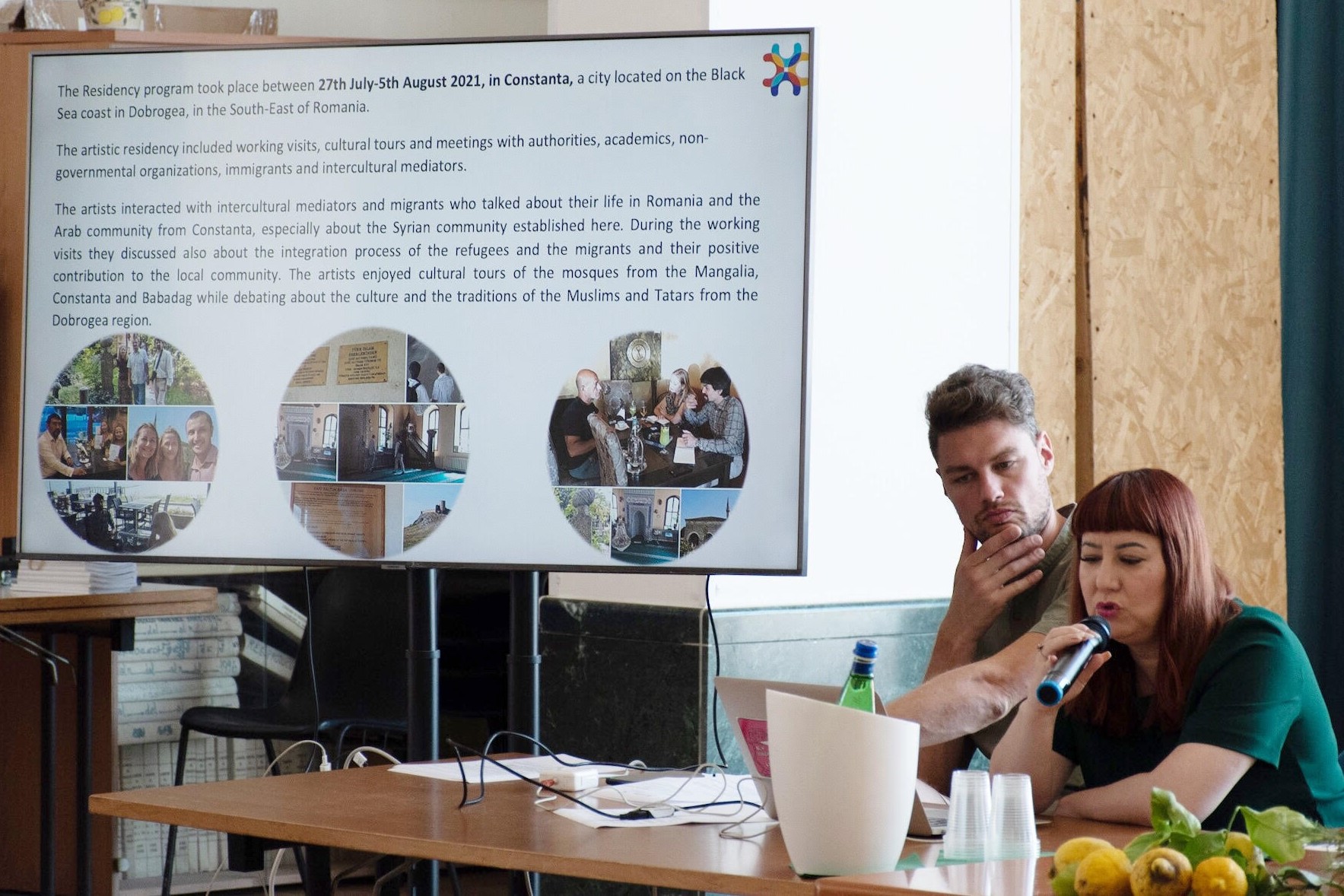 Constanta’s (Romania) Artistic Residency included working visits, cultural tours and meetings with authorities, academics, non-governmental organizations, immigrants and intercultural mediators.  The artists Victoria Ghilas and Constantin Rusu – both able to use a number of drawing and painting techniques – interacted with intercultural mediators and migrants who talked about their life in Romania and the Arab community from Constanta, especially about the Syrian community established here. During the working visits they discussed also about the integration process of the refugees and the migrants and their positive contribution to the local community. The role of the artistic creations of Victoria Ghilas and Constantin Rusu was to raise awareness, knowledge and understanding between natives and immigrants and to create a renewed sense of trust and belonging to a certain place, having a positive impact, both on the involvement of the locals into society, and also on their perception regarding the immigrants. 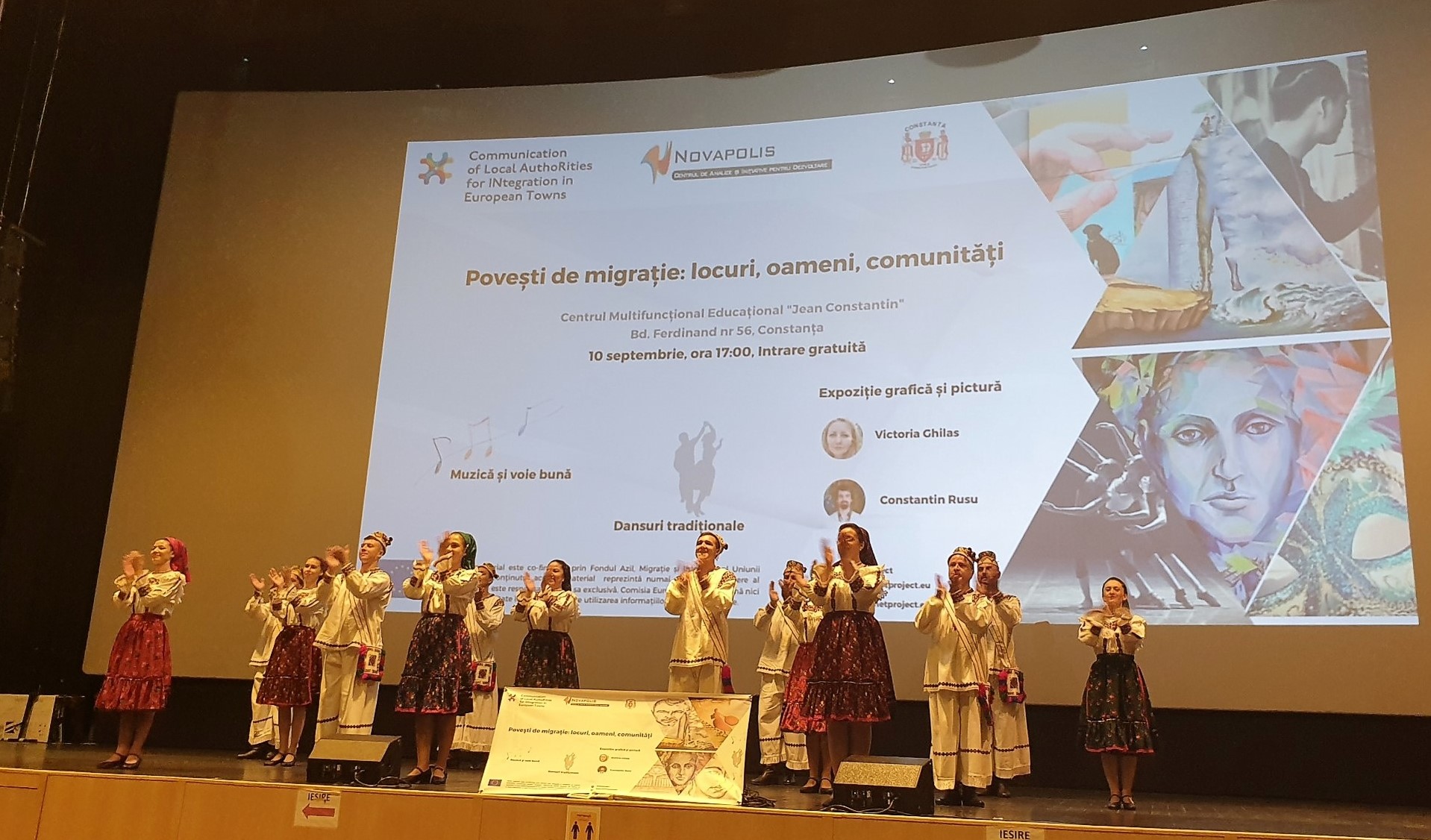 To make the local community positively affected by the work of the artists a public event has been organized. It provided a space of discussions on migration and included an art exhibition with paintings, sketches, photos and artistic moments – traditional Dobrogean music and dances as a universal language of knowledge and good coexistence. The campaign included the contribution of third-country nationals and migrants from Constanta – mediators and migrants from Syria and Republic of Moldova. The artistic creations made by the two Romanian artists during the artistic residency included a series of paintings, pictures, sketches and small texts that highlight and expressed the vision regarding the feelings and the emotions of migrants, the impact and their influence within the local community, the interaction or the reciprocity, the change and the evolution. 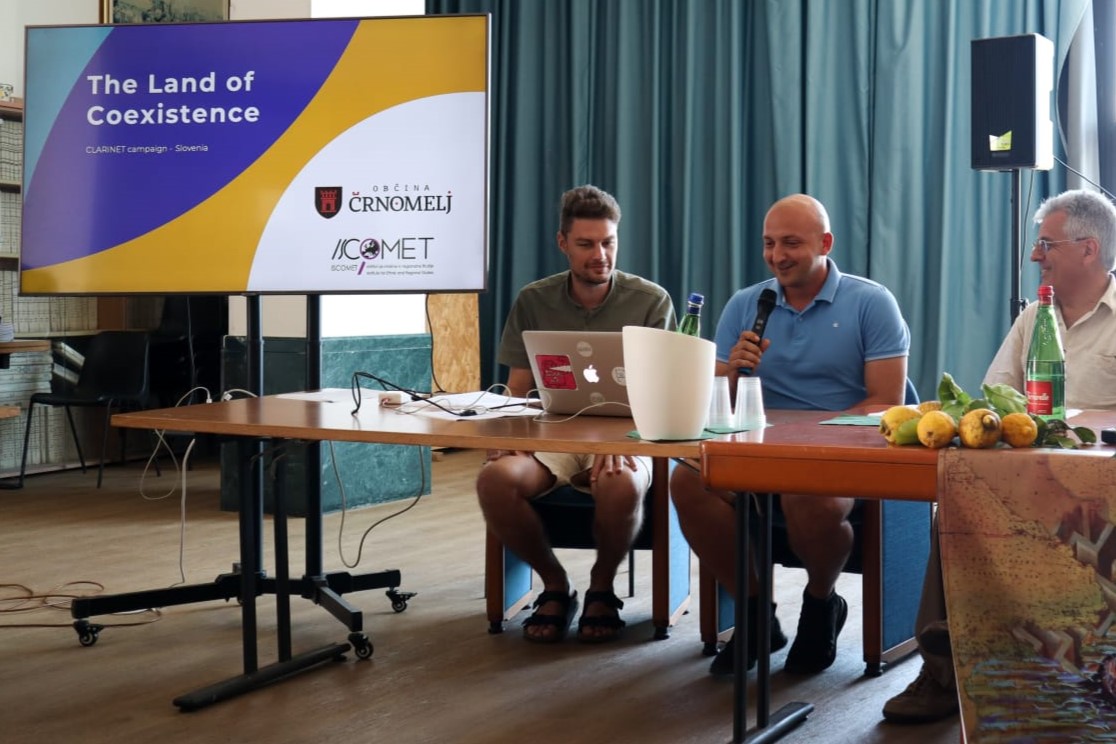 Slovenia’s Residency took place in Črnomelj, in Bela Krajina region, in the frame of the Communication Campaign “The Land of Coexistence” – having the goal of raising awareness of the rich history of migrations in the region, showing the historical benefits of migrations and acknowledging that migrants are among us and are already contributing to our societies. Several connected activities have been implemented, including Artistic Residency, a children’s workshop, Exhibition on the history of migrations in Bela krajina, sensitizing films and documentaries like “Different Together“, a final event with an exhibition followed by an itinerant exhibition in the following month. 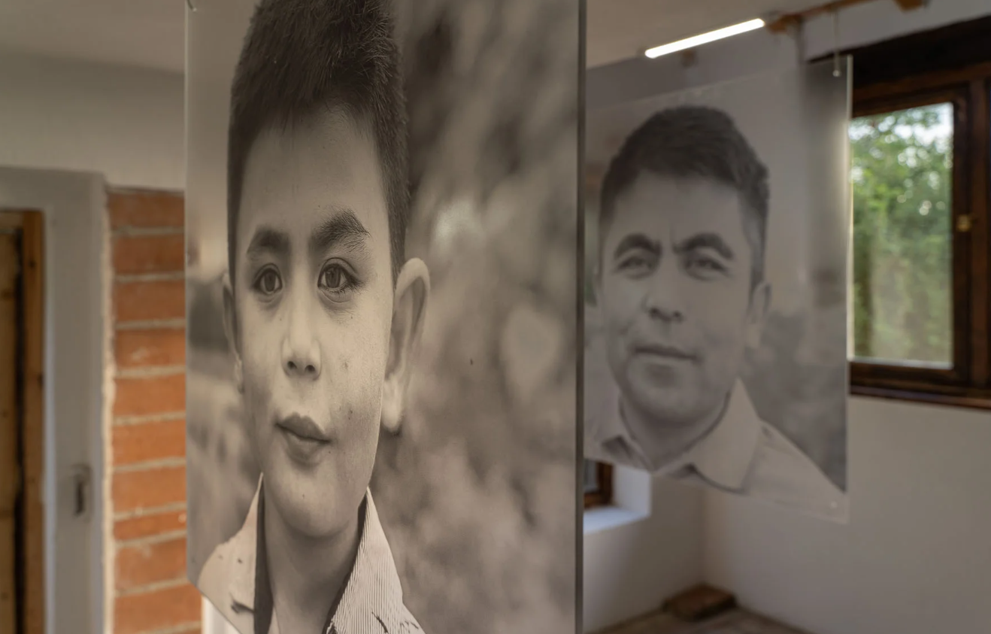 In Traiskirchen, Austria, the Residency has been centered on photography and storytelling and originates from the special relation between the filmmaker Victor Jaschke and Hamid and his family, Afghans with a complex war and migration background. Victor has been looking for a way to make Hamid’s story visible for a long time. Now that Hamid has been granted asylum and has thought about how he can tell his son about his experiences, they decided to try that together. For the artistic residence Victor has been working together with social activist Hamid and his wife Anis and his son Hikmat on three weekends, exploring video as a communication tool. The resulting time-lapse portraits in the video visualize the thoughts and feelings of the listener. When used correctly, this technique gives the viewed dignity and acts as an intensifier of attention for the viewer. 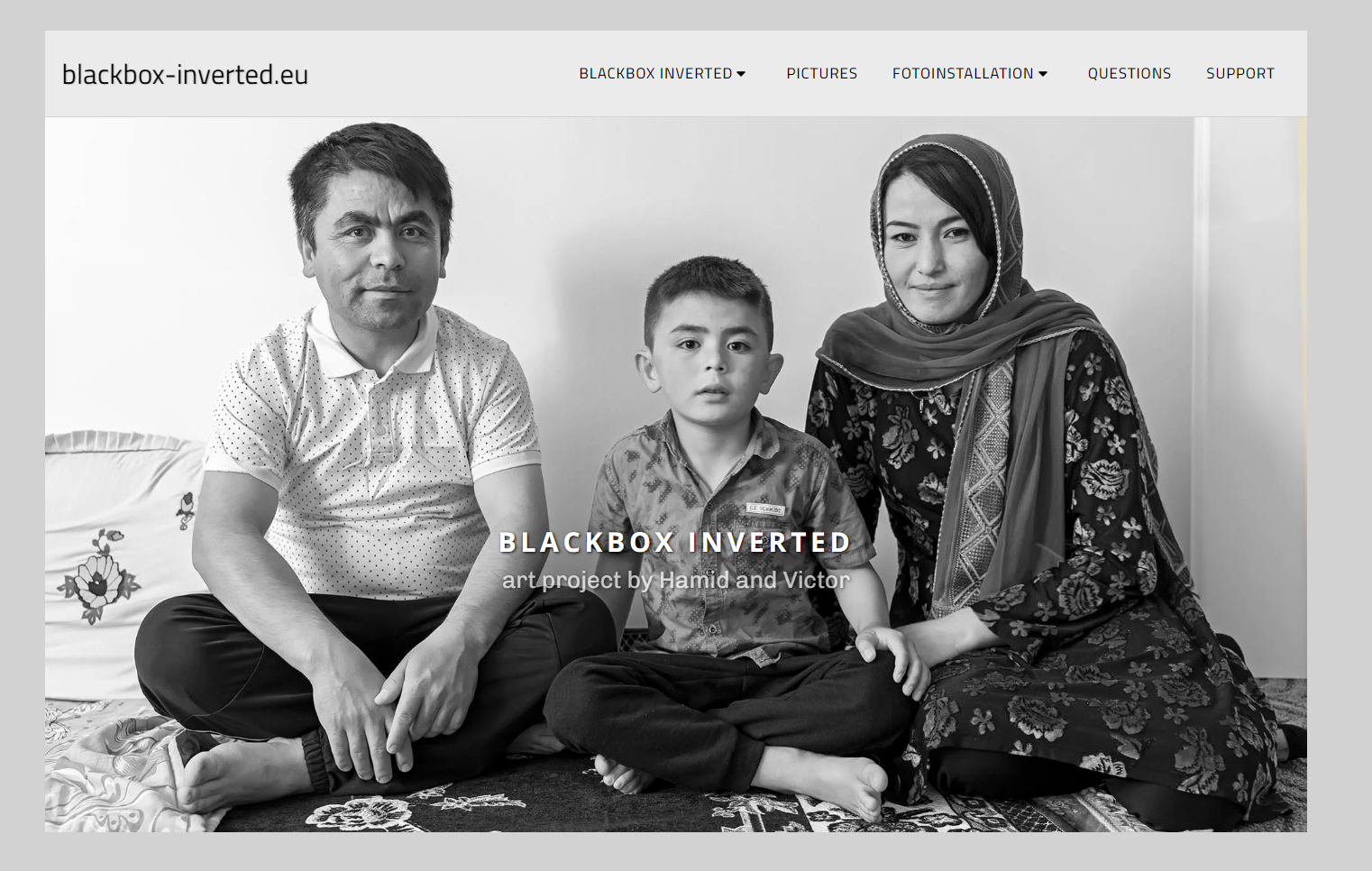 The idea behind the choice to develop this tool is that the life of refugees is a black box. The authorities try to anonymize asylum seekers, on the one hand to protect them from further persecution, but also to avoid fraternization with the local population and thus resistance in the event of deportation. Asylum seekers gloss over their own experiences so as not to worry their families. “BLACKBOX INVERTED” tries to reverse this mechanism inside a nuclear family. The exhibition is still on display in the “Atelier of Global Talents”, which is located on a popular walking and biking route to the vineyards of Traiskirchen. Passers-by can visit the exhibition at any time, due to the solar panel attached to the roof, the exhibition is also visible at night.

The Hungarian Artistic Residency took place in Kásád, in Baranya County, with the goal of celebrating diversity and solidarity and to open a debate with local people, hear their thoughts, ideas, stories on these definitions. For these aims they recorded an interview film with the support of Jakab Tóth in the territory and created a painting with co-creative methods led by the local artist, Gyöngyi Ráczné Kalányos. Meanwhile diversity has been celebrated by inviting local people form the region to present their cultural identities (Croatian, German, Roma and Hungarian) and get to know some people coming from other cultures as well.

The local community has been actively involved in the residency by presenting their cultures, sharing their stories in the interview-film and painting together the painting of solidarity. The Communication Campaign focused on solidarity and diversity. An interview film with local people about what solidarity and the coexistence of cultures mean to them has been made, and a joint co-creative painting on the subject has been organized with a local Roma painter.